Who Cares About the Snow When There's Shopping to be Done?

So on Thursday night it snowed again. When I went to bed it was snowing very, very hard, this bothered me for two reasons. Firstly Himself was away and was due to travel home on Saturday and secondly my bestie Soo was due to come over for some quality girlie time round the charity shops. Thankfully it clearly stopped the minute I drew the curtains because when I got up in the morning there was only a couple of inches of snow to be seen.
This meant the roads were pretty clear come the weekend making travelling and shopping possible, Huzzah!

Soo, (who I must point out is never, never late!) arrived right on time as ever, despite having to hack ice off the inside as well as outside of her car!
We fortified with tea and gossip and then hit the shops.
Both of us found bargains and both of us were stunned to silence not once, but twice. The first time was by the dress below and the second by a woman wearing the most monstrous coat your minds could ever imagine. By the time I had recovered enough to find my camera she was gone. I am gutted I wasn't able to sneak a picture, not only to share with you, but just to remind myself of how truly terrible it was.
However behold 'THE' dress 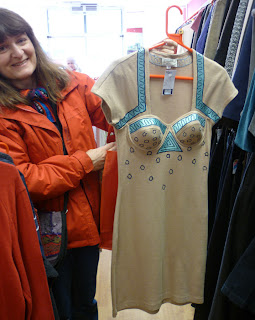 Instead will show you my bargains :-) 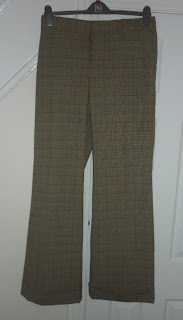 These trousers are a win because they are very long and they were a bargainous £1. The downside is they are 'dry clean only'. However on checking the label and seeing that they are made from a wool mix with polyester lining I took the risk and stuck them in the wash today on a delicates cycle and as you can see they survived unscathed. 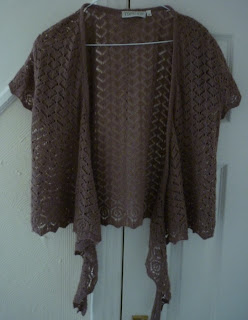 Little fawn shrug,also £1. It's a bit bobbly but I can sort that. 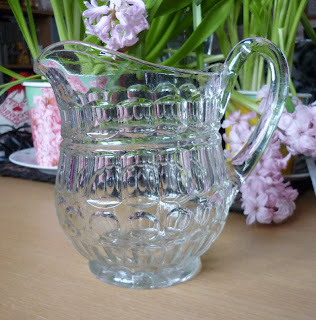 Pressed glass jug for £2. I just really liked this. Possibly because my Nan used to have one similar that she used for serving custard. I could do the same, but as custard rarely makes it as far as anywhere other than straight into my mouth from the saucepan I will probably use it for flowers! 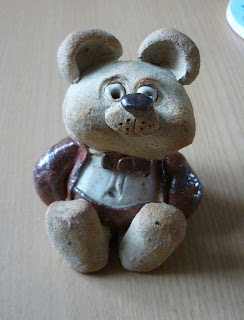 This little chap was 99p and I think it was the bowtie that sold him to me. I should have done a before and after shot, because he was seriously filthy dirty. This is the 'after', a damn good scrub with an old toothbrush and he is a completely different colour, as Himself said it does make you wonder where on earth he was kept to have been so very dirty........ 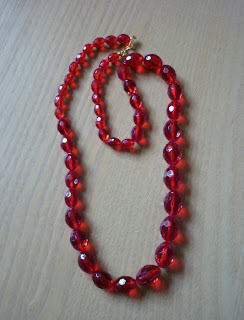 Yet another glass bead necklace, at 49p it would have been rude not to! 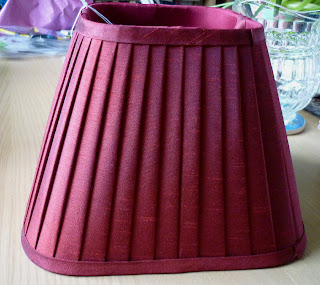 A lovely lampshade for £2. Sadly it doesn't actually fit my bedside lampwhich is where I need a new lampshade but I'm sure I will find it another home!


Finally I spotted this black cat for my sister. I am saying nothing, other than I know she will love it! 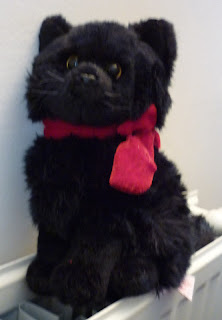 After all that shopping we went for some much needed food. Soo ordered the soup of the day and I ordered a tuna melt. After an extraordinarly long wait for two such simple food items, our fayre finally arrived. I picked up my sandwich to find it was basically 2 bits of toast with warm tuna between them. I took it back to the counter and said
'excuse me, but I ordered a tuna melt and there is no cheese in it'  The man took my plate, and without a word disappeared into the kitchen!
I sat down again and about 5 minutes later he reappeared with my plate, I got up to meet him and he said 'Sorry it doesn't come with cheese' then tried to hand the plate back to me. I was somewhat confused by this and replied
'but it's meant to be a tuna melt, a melt has cheese in it, in fact it's the cheese that makes a melt a melt'.
To which he replied 'Ok madam I'll get you some cheese added' and vanished yet again with my plate.
I have to say when I did finally get my tuna melt it was delicious, but seriously, has anyone ever come across a melt sandwich that doesn't have cheese in it??
Posted by Miss Magpie at 14:58