I'm feeling reflective as I sit here drinking tea and listening to yet another storm battering the U.K outside. 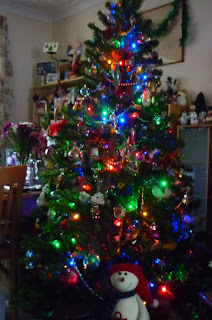 Once more I am grateful we live on a hill, I can't even begin to imagine how it must have felt to be flooded out on Christmas Eve like some in this area. Now heavy snow the U.K is never ready for, but storms? It's a joke, they need to pull their fingers out and spend the money that is needed on keeping storm drains and culverts clear and stop building houses on flood plains!!

It is meant to be recycling day today as you can imagine 70 mile an hour winds and papery goods do not mix, it's like there has been a recycling explosion out there. 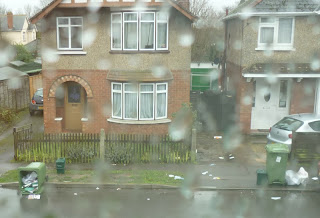 I would step out and take a picture of the street which is much worse put it's hammering down so I shall make do with the view from my window and you can get the gist.

So Christmas came and went. I worked Christmas Eve, no biggie to some who do it all the time I know, but it's the first one I've ever had to work in all my 20 odd years of employment. It sucked royally, especially as there was nothing to do and the other department fucked of at 12 without telling us! As you can gather I was not happy about that.

On the plus side Marks at the station had reduced everything including the flowers so I got a £22 bouquet for £3. All the staff at the station were there buying them up so I think there were some very happy wives/girlfriends/boyfriends/other that night. 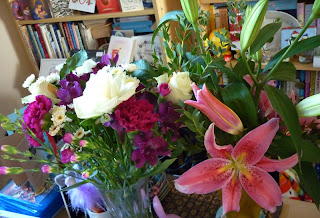 So big it filled 2 vases.

I also bought one for my Sister in Law to take on Christmas Day. I got a jug out to put them in over night, and inside it there was the most enormous spider you have ever seen in your life!?! EEEK
It's testament to how much I love the jug that I managed to place it on the floor rather than drop and or hurl it from me! I think I aged 10 years.

Christmas day was craziness, busy noisy and fun. We brought Nephew Number One home with us to sleep over. I know he's 19 but as his aunt/godmother it did feel a little wrong to sit up until the early hours drinking to the point of him vomiting.
I did try to impart some hard learnt drinking wisdom but he wasn't interested. I guess the whole point is you have to learn it yourself!

I went to the sales on Friday, now that was a revelation. I have always loved the sales, I usually march into battle on Boxing Day but the last couple of years I haven't been for one reason or another and now it's like something has changed. It was horrific, too many people, too much nasty rubbish, too hot, too loud, you get the picture.
A couple of hours was enough and we beat a hasty retreat.
I did pick up a couple of bits and pieces, I had a voucher to spend in Accessorize and scored this huge satchel type bag. 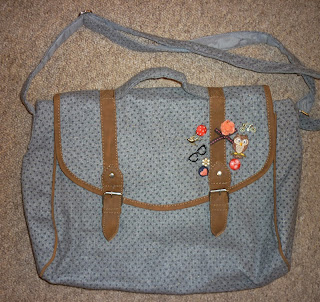 You can't see in the picture but it has gold flecks in the fabric so it subtly sparkles. Not only was it reduced in the sale, it has extra money off as the straps were broken. I examined it carefully and figured I could fix it so took a chance. Here it is all fixed and with a couple of extra adornments on the front.

What I needed was a new work bag, which I didn't find and a new winter coat which I didn't find either. Now that I have been hunting for for some time, in charity shops, online everywhere. Everything seems to be either black or grey and if it's not have some sort of mental collar thing going on. I don't want black or grey or a great huge collar thank you.
I ended up spending my Christmas pennies shopping online where I have ordered a coat we shall see when it arrives.....

After the nephew had departed I was able to move all my 'stuff' back into the front bedroom. I did that yesterday and must conclude I really do have far to much 'stuff' and it is quite possible I might just have too many handbags. I have displayed some of my evening bags on the door mostly because it looks pretty but partly because there is nowhere else for them to go! 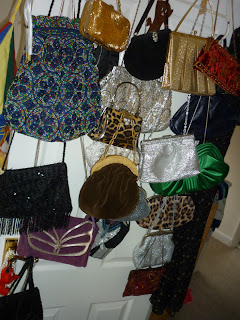 Right I'm off to put the kettle on and have a browse through my Christmas books. 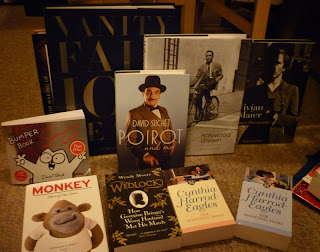 I'll see you in the new year.