Another week has taken wing, sent on it's way with yet more rain and gale force winds.
I came home on Friday and was taking off my boots whilst watching with half an eye the 6pm news and also listening to Himself tell me my Dad had left a strange message in the phone. "I'll play it to you" he said at just the same time as my brain registered the news reader saying "blah blah Oxfordshire village,flooding, blah blah blah" and caught my full attention. I realised in shock that the village in question was my parents and the reporter wading thigh deep towards the camera was actually doing so through rushing water at the end of my parent's street!!

It was quite surreal seeing this on the national news I have to say. My parents have lived in their house 25 years and there has never, ever been flooding to this scale before. Yes there is a stream through the village but as their house is on slightly higher ground other than a bit of water up the garden they are usually ok, and yet for the first time ever suddenly they too had water lapping at the back door step and men delivering sandbags!

Thankfully not as much rain feel over night on either Friday or Saturday as forecasted and the pumps that the environmental agency brought in did their job so by this morning Mum was happy to report the water had receded down the garden leaving only a 'delightful' brown sludge in it's wake, lovely.

Fingers crossed they will be alright over the next couple of weeks when yet more rain and storms are forecast. 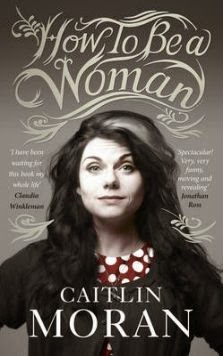 Talking of surreal, I was lying in bed this morning reading 'How to be a Woman by Caitlin Moran' (which has been in my book tower waiting for me to start it for at least a year now!)
As it happens I follow Caitlin Moran on Twitter and some time ago she had asked people to tweet her with experiences of outrageous sexism they had encountered so I did.


In Chapter 8 of the book, which is all about sexism, she describes asking the question on Twitter and the deluge of replies she got back and then goes on to say 'these are the ones that actually made me gasp' and there was my tweet!
I sat bolt upright, elbowed Himself and went "Oh my god, I'm in print, I'm actually in someone's book!" and read the relevant passage out. He responded with a satisfyingly outraged swear word at the incident, which I had never told him about before.
So yes, a shocking incident that happened to me is forever immortalized in print on page 130 of 'How to be a Woman'.
In case you are wondering, I'm the lucky person who had a guy leap out of a van and stick his hand up her skirt to see if she was wearing stockings or tights whilst she stood at the bus stop!
I wish I could say I walloped him or gave some manner of withering retort but in all honesty I was so shocked and taken aback that I just stood there like a lemon. Being much older, more experienced and far more jaded, I'm pretty sure if such a thing happened today my fist would be in his face and my knee in his groin faster than you could blink.

Anyway moving swiftly on to happier things, as I mentioned in my last post Friday was wear red day for The British Heart Foundation. 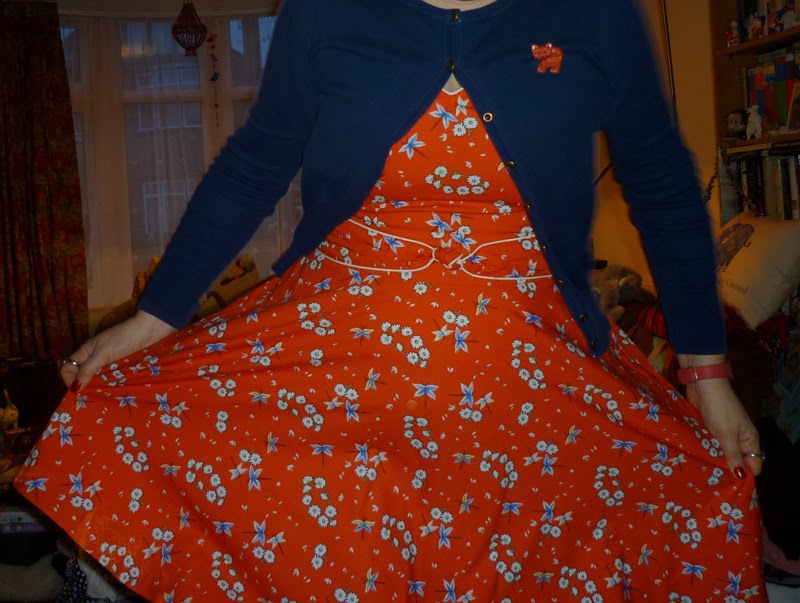 Even though it was dress down Friday I 'Ramped up the Red' in my lovely Trollied Dolly frock and little red fox brooch. I made a peanut butter tray bake which has so much sinful stuff in it (peanut butter, butter, sugar, shortbread and chocolate) I was accused of trying to bring on heart attacks whilst raising money to prevent them! We had great fun stuffing our faces with cake and raised £146.

But even better than raising so much and by far the best bit of news from my working week? Nightmare boss has resigned!!!!!!! Oh happy day indeed, the weight that has lifted off our department is extraordinary. It was like working in an office of Cheshire Cats, all wall to wall beaming smiles. Not sure what happens next, but whatever it is and who ever they are it can't be any worse.

On Saturday Soo came over for gossip and charity shop shopping and boy did we shop up a storm. I did manage to have mini two disasters. The lovely crystal sherry glass I bought Himself for 10p got broken in my bag before I even got back in the house (oopps) and the rather lovely, but a bit smelly, red cheongsam dress shrank dramatically when I stuffed it in the wash (arse!) 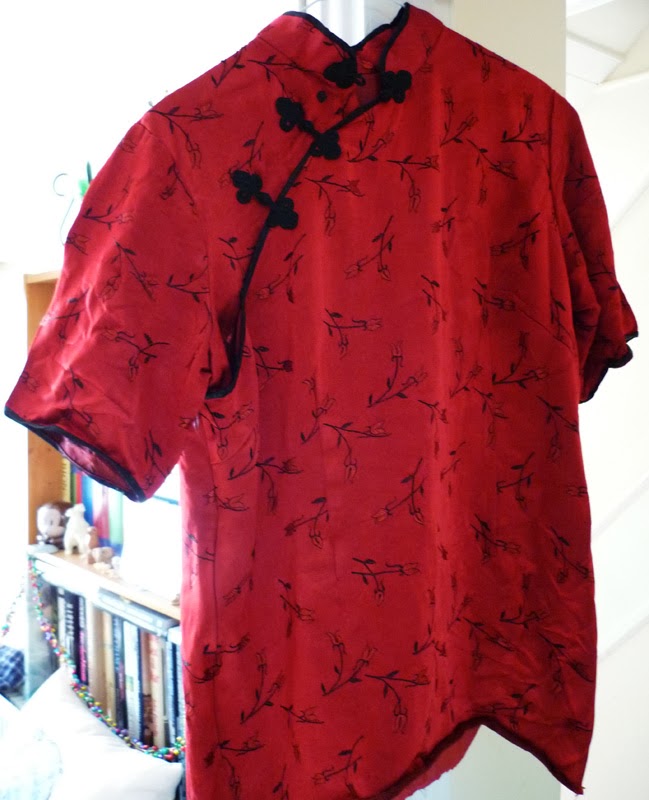 In an attempt at salvation, I have chopped it off at the waist and will try making it into a top instead. I am nothing if not adventurous.

I also bought a lovely forest green shirt for work, 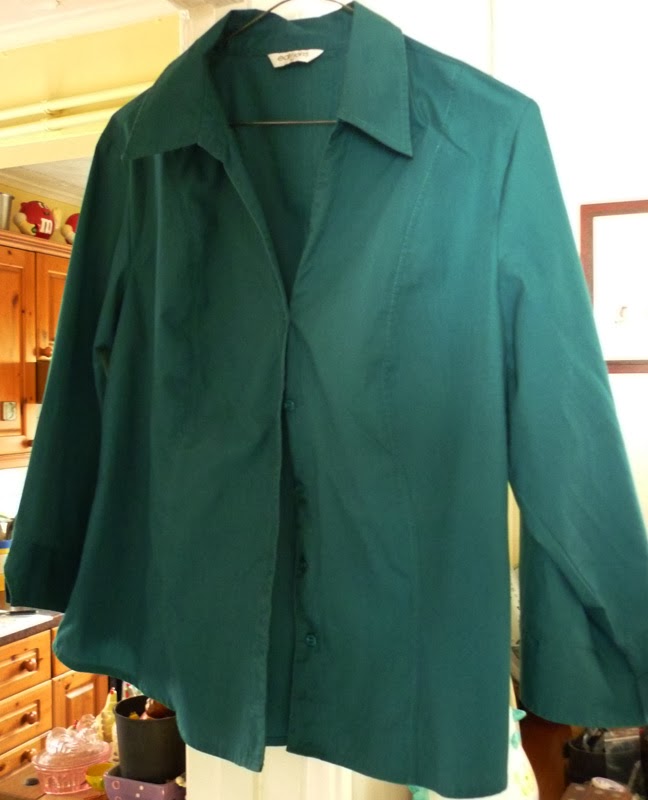 a scarf, some silver spoons, a beret, a ceramic tile, a birthday gift for Soo (not shown as she reads my blog!) and 2 brooches. 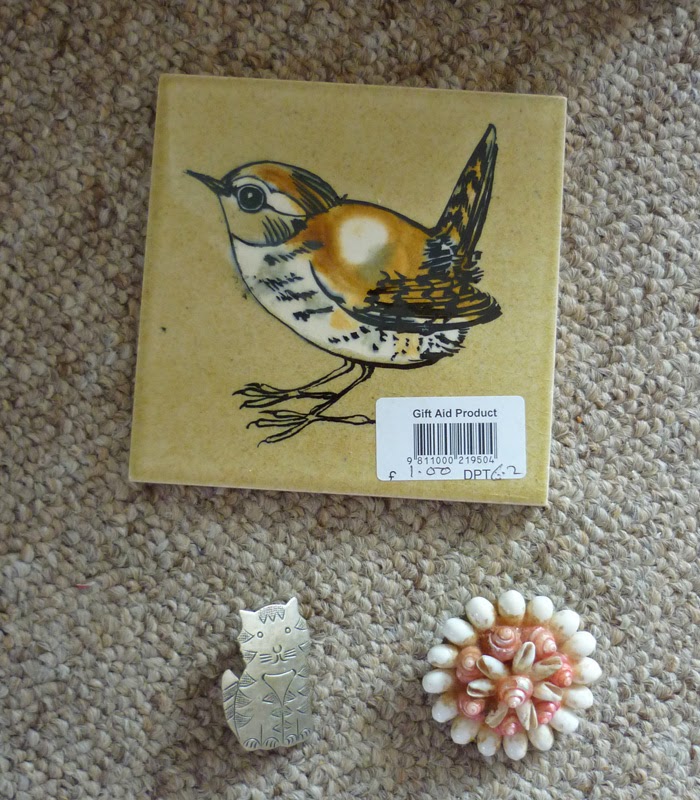 I did score a magnificent cocktail dress too.

I'm no label snob, but I was more than happy to pay £12.50 for a brand new Hobbs evening dress. A quick squizz on their website shows full price there wouldn't have been much change from £200 on this beauty. Need to find me an occasion to wear it now....


Some random pictures from our day 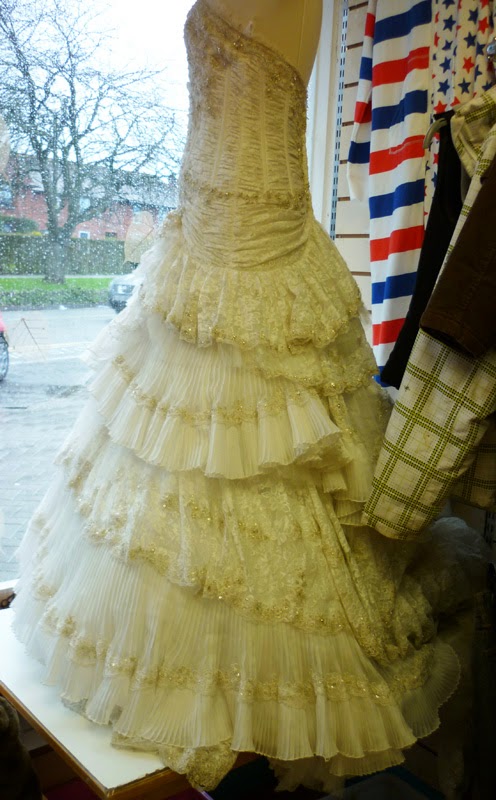 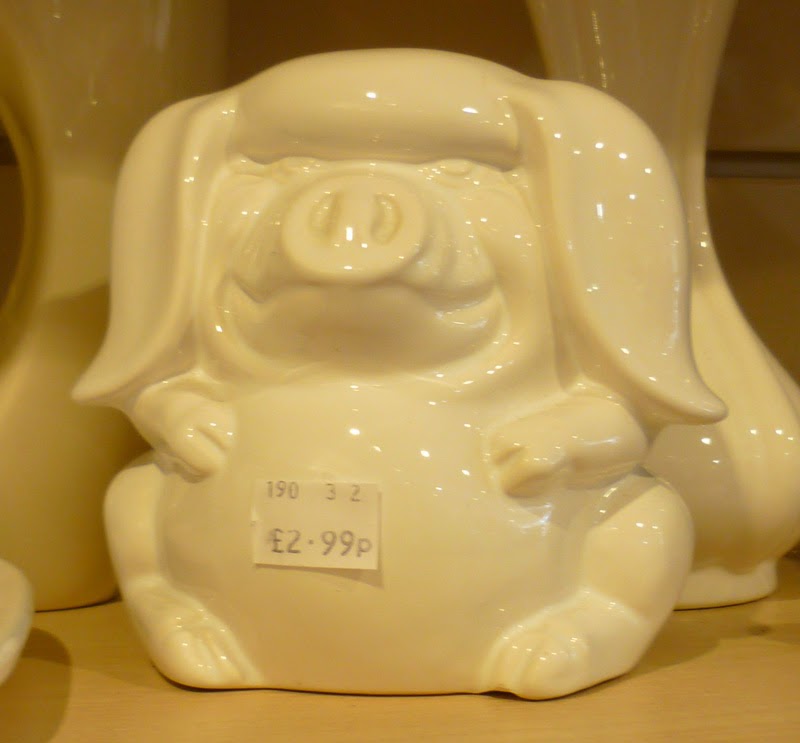 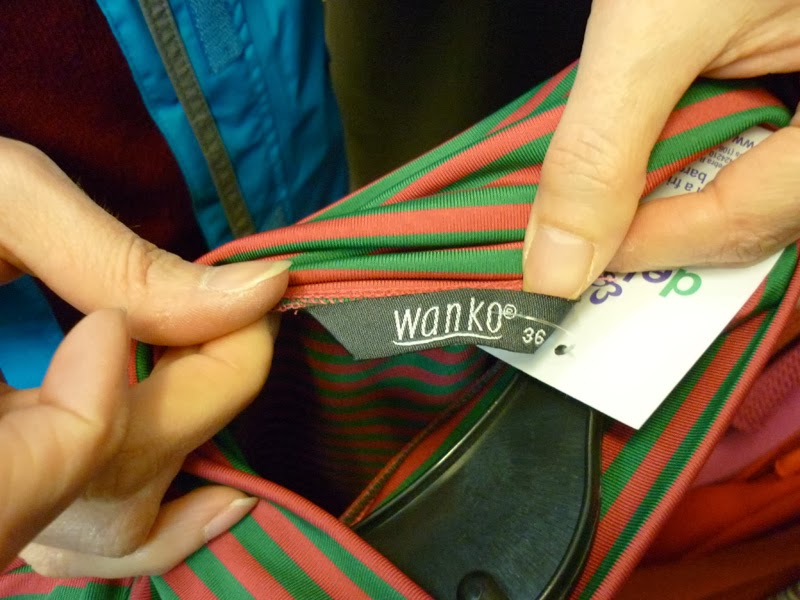 A label that had us both snorting like adolescent boys 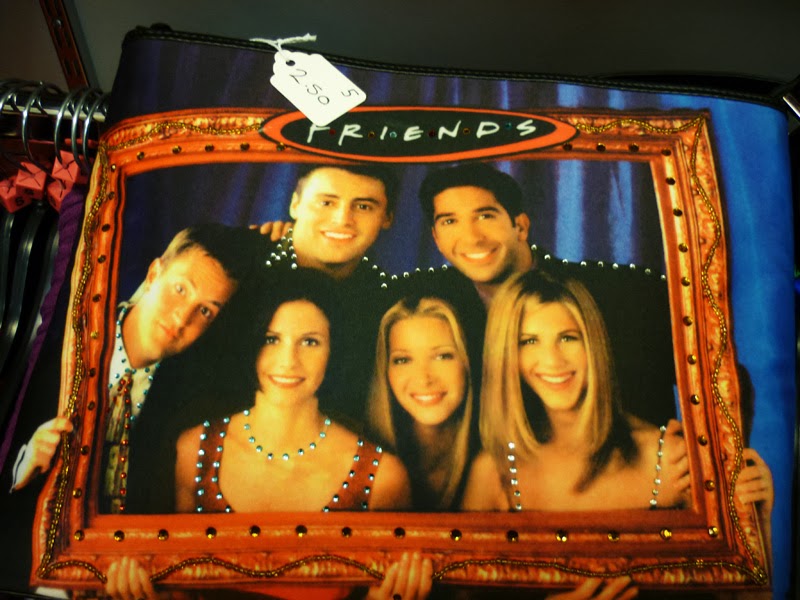 A hideous handbag, sadly my camera has toned down the colours, believe me when I say they all looked tangoed but with red lipstick on. 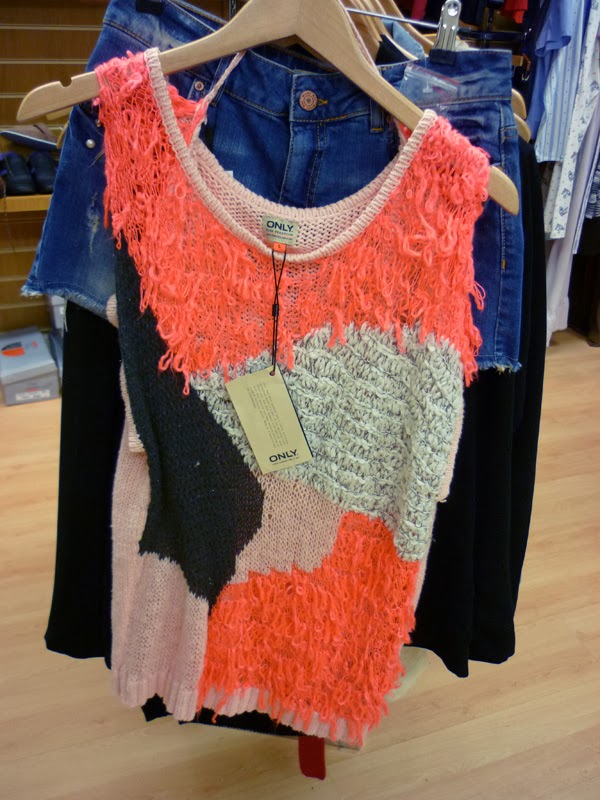 Finally a bizarre top that left me struggling for words, again sadly, the camera has toned down and dulled the florescent pink, scarlet, dove grey and beige......such a random mix of colours. No wonder it still had it's label.

I also went to pick up a pair of boots that I had put in to be reheeled. Whilst there I noticed the most revoltingly filthy pair of boots on the shelf. I couldn't help but ask the lady if they often get boots in in such a horrible condition. She sighed and said more than you would imagine, though if she is behind the till at the time she refuses to take them until they have been cleaned. Which apparently lead to one lady holding a horse muck encrusted pair to knock them vigorously against the counter 'to remove the excess' and basically cover the counter and floor with horse shit before leaving!?!

On that happy note I shall sign off with the two brooches now they have been cleaned and the shell one given a touch up with purple iridescent nail polish because I don't do pink. 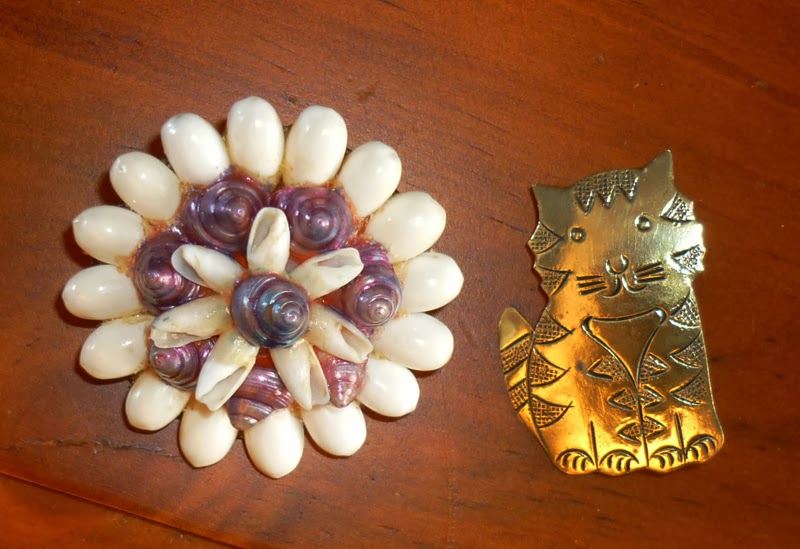