Sherlock Holmes and The 39 Steps.

Well this post is very late! I meant to post earlier honest, I don't know what went wrong.

Anyway on Halloween we took ourselves off to The Big Smoke for our anniversary. First stop was a quick visit to 'Poirot's' block of flats in Charterhouse Square, well we were so close by it would have been rude not too. 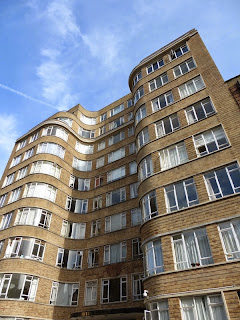 We then mooched along the road enjoying the glorious sunshine until we reached The Museum of London where we had tickets for the Sherlock Holmes Exhibition. 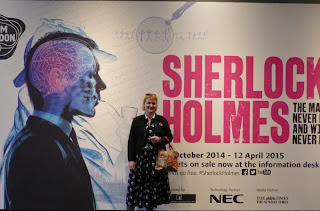 Himself told me to stand by the poster for a blog picture, I have no idea why I'm doing that granny handbag arm thing, I never hold my bag like that usually, weird.....

As it was Halloween I decided to wear my Vivian of Holloway skull and crossbones dress.
I'm ashamed to say this is the first time I have ever worn it, it's been hanging in the wardrobe ever since I bought it. As you can imagine it cost quite a bit (ok, a lot) and if I'm honest I was too scared to try it on in case it didn't fit.


We both enjoyed the exhibition but agreed it was too small, it was like you were just getting into it and the next thing you turned the corner and were outside!
Basically you came out wanting more. When you keep in mind it was mostly about the history of Sherlock Holmes on stage and screen it would have been great to have seen much more about the behind the scenes side of things, the planning, the casting, the characterization, things like that.

The Victorian London of the books was depicted by various period photos, paintings and etchings, all of locations mentioned in the stories. Personally I particularly liked the part of the exhibition that showed the different aspects of Holmes's character, all in all very interesting.

My big complaint though is that the Jeremy Brett Sherlock, to me the definitive Holmes, was hardly to be seen!


After the museum we mooched past St Paul's 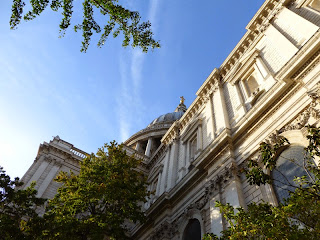 down Fleet Street and along the embankment 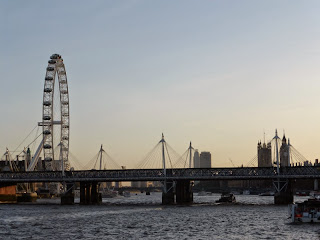 There we caught the tube with a handful of zombies and a few witches all heading to Oxford Street. From where we walked to Piccadilly to see The 39 Steps. 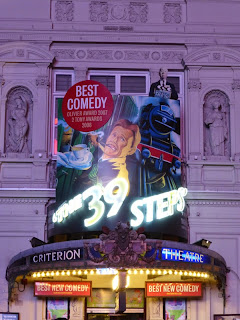 We did call in at our favourite London pub for a cheeky drink or two first. 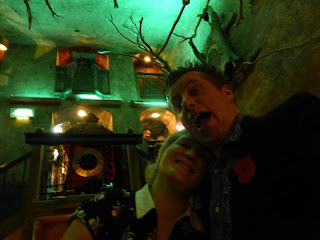 not telling you where it is or everyone will start going! ;-)


The show was fantastic, I highly recommend it. It is a comedy based on the Alfred Hitchcock film of the book.
The cast is made up of only 4 members who play all the 130 odd characters from the film!
It's very cleverly done and very funny.
They certainly shoe in a lot of Hitchcock references which is an added extra, I especially loved the paper cutout who did the famous Alfred 'cameo'.

Sadly after the theatre it was time to go home due to a super early last train home. We dived into Tesco to buy a couple of beers for the journey, queuing up behind yet more zombies and a ghoul or two.
The underground station was also full of zombies all heading out towards Eros, it made me feel like Cinders having to go home early and miss all the fun.

Having said that by the time I got home all I was fit for was bed and sleep. Poor old duck, no wonder I've started carrying my handbag like my Nan!