I should be finishing my Christmas cards but instead I'm browsing the internet and wondering if I am actually going to be able to get home when I finish at 7pm.
Apparently the trains are all up the spout because of a major power failure and have been since 2.30pm.
As it has been snowing on and off one can only imagine the wrong kind of snowflake fell on the points and shorted out the lot! Always the way when I'm expecting a phonecall at 8pm and I'm starving hungry. *sigh*

Today was the day of the christmas carol service they hold in the Divinity School. I go every year because it is just wonderful. 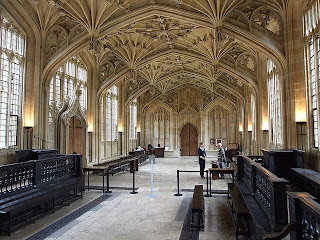 The building has such amazing accoustics and is such a lovely setting. I always feel very festive after I've been, which I need this year. For a self confessed Mrs Christmas I seem to be very lacking in the spirit of it all right now. The dedcorations have been out of the loft for a week now and I haven't even openned one box.

We were in Torquay at the weekend to do early Christmas with Himself's family. We were all there en masse for Nephew number two's first birthday.
Himself learnt the lesson that; you always have a change of clothes handy where babies are concerned, for them and you, the hard way. Nephew number two grabbed Himself's pint and tipped it straight into his lap, so the rest of the evening was spent in wet jeans until we could get back to his sister's and put them in the wash. He then sat around in his pyjamas until 2pm the next day until they had dried enough to wear! Lucky really becasue we had to leave to go home at 3pm. My favourite bit of the journey home is when you get to Dawlish and the train runs right next to the sea, it's beautiful 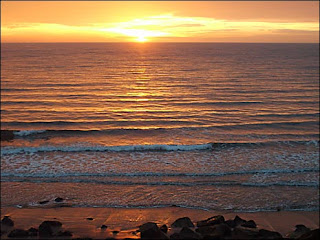 This is the view from the train window!

I managed to scoot into a couple of charity shops in Paignton but there was nothing to be had. Seems the same lack of lovely stuff isn't confined to my town alone.

I found the same on Monday when I had to go to the dentist in the next town and only managed to find a pottery elephant in all the shops I went into. I shall have to post a picture of him later.

Well I'd best go and start closing up and end this ramble.
Posted by Miss Magpie at 10:03