I will be doing a proper full blog post shortly but I wanted to share this whilst I thought of it because I found it amusing. 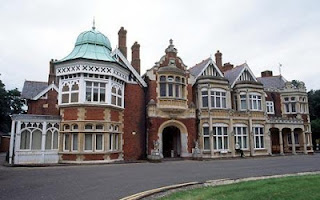 My parents went on a pensioners coach trip to Bletchley Park a couple of weeks ago. They were taken on an organised tour with a guide who explained the history and various aspects of the work done there as they went round. He was deeply involved in explaining how one of the machines worked when one of the ladies in the party started to tut and in the end burst out with 'No, no you don't do it like that!'
The guide was apparently not at all impressed with being interrupted and started to say 'I think you will find madam that....' when she interrupted again 'No, you don't do it like that, you do it like this' and proceeded to demonstrate!

Turns out they both took their vow of secrecy very seriously!
Posted by Miss Magpie at 11:08