Getting a tattoo is something I have pondered about on and off over the years and it was brought to my mind along with tattoos in general this week by two things.

First was sitting opposite an wonderfully elegant older woman on the train.Think the Dames Judi Dench and Maggie Smith!
Oh she looked amazing and had that aura about her, you know? I was trying not to stare in an obvious manner, when I spotted a tattoo on her hand, it was a thick black vine around her wrist with bright orange leaves coming down onto her hand and quite frankly it threw me.
Mostly I think because sadly it wasn't a great tattoo, but a wobbly crudely executed design that just looked ugly and so out of place on such an elegant woman, and yes I know that sounds judgmental but it really was bad.

Second was a very interesting article in a magazine about the rise in people getting tattoos and public opinion of them in general. The person who wrote it does not have any tattoos, nor plans to get any done but was neither pro or anti. They did however make a couple of points that absolutely rang true with me and my own views and experiences.

Firstly that for every stunning piece of inked artwork you see, there are at least 10 'Lopsided badly drawn Bart Simpsons'. This is so true, see above as a casing point and secondly, statistically almost half the people with tattoos regret the design they have. Now this also rang true.

A lot of my friends have tattoos and many of them have come to hate them, not necessarily the actually having of a tattoo on their person but mostly the design they chose.
In some cases because it was poorly executed, or in a couple because it represents a person they are no longer romantically involved with and therefore can no longer physically stand, mostly though it's because it no longer represents them as a person.

My lovely sister has many tattoos and she covers all three of these bases bless her!

She had a cutsey cartoon dragon done on her shoulder when she was 17 which she came to hate with a passionate loathing. She had a very 90's tribal motif on her midriff that was designed for her by an ex-boyfriend, and finally what was meant to be a unicorn but was so badly done it actually looked  like a demented goat on her ankle!
I say 'had' because as of this year she has finally had all three covered with different designs. It has been painful, going over old ink is more painful than a new tattoo, and it has been very expensive. Happily she loves her new artwork but sadly not everyone can afford to cover over or even have removed their tattooed mistakes.

When I was 17 I also was gunning to get a tattoo. I designed it myself and even painted it on the arm of my leather biker jacket in the spot where I wanted it to be on my personage. I'm very grateful now I was too young and too scared of pain to have it done!
A huge bat flying across a full moon in a cloudy night sky is not really me, and as I have actually never really been into vampires I'm not sure now what the design was even about, but clearly at the time......

Anyway since then fads have come and gone, design ideas have come and gone, and I have still not got one done. No age excuse anymore but the low pain threshold is still there and is the thing that has held me back.
The one picture I have flirted with for 10 years or more is a little bushy tailed cat, I want it in purple with a black outline and on my ankle, but in all honesty the fear of making a fool of myself in the tattooists chair because I don't do pain has stopped me every time.

Also I would need to find the right artist. I have seen some stunning, stunning work but my god I have seen some shit too and the last thing I want is to finally psych myself up for it and then end up with a demented goat! 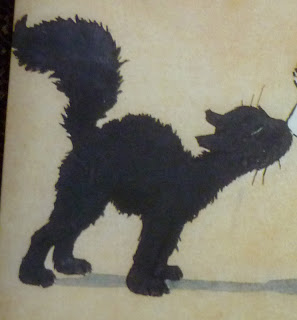