This week I have had a heavy cold and deadlines at work. I have crawled in dosed up on Lemsip and crawled home and into bed. Today I am finally feeling a bit more human if somewhat drained, so I was thinking about blogging and what to blog about after having done nothing much except feel ill. That was until I got a phonecall to say an ex-work colleague/dinner companion/movie buddy/gossip pal/mad Bon Jovi worshiping friend had passed away last night.


I feel strangely displaced. I no longer work in the place we spent 23 years working together in. I know there was a huge outpouring of grief there today, for the first time in the history of the library they closed briefly on her behalf. As another numb friend said 'I just cannot picture the Old Library without Vera' and that says it all for me too. She was a larger than life character with a huge zest for life. She could talk for England and could be SO frustrating at times but she would give you the shirt from her back if she thought it would help you and she was just.....kind.

Vera was incredibly talented, she adored food and trying out the cuisines of other countries especially cooking them for herself if she could. She loved to travel and went all over the world, which I envied her for at times.
She loved America, as do I, and it was somewhere we talked about a lot over the years, mostly we fancied the same kind of bloke and talked about that a lot too!

A few years ago she signed up for a sliversmithing night class. She quickly found a real love of working with silver and proved to have an amazing flair for it too. One of my favourite crosses (I have a thing for crosses, I have a LOT of crosses) is the one she made me.
It was one of her very early pieces and she hated it. It was a bit wonky a bit too rough and ready, it didn't meet her standards and she made noises about melting it down. I loved it for exactly the reasons she didn't and said I wanted to buy it, but she would not sell it to me because it wasn't 'right'. It became a joke between us for years. With me asking every so often 'When are you going to give in and let me buy my cross?'

The last two years were very very tough for her. She had been caring for both her parents and still working full time. Her Mum had dementia and was deteriorating fast, and her father was frail and needed help around the home. Out of the blue her beloved father died and her mother finally had to go into care. I have never seen Vera so worn down as she was then. She was an intensly private person and most people at work simply didn't have a clue about what she was going through and why she might be being a bit snappish or difficult. I feel privileged that she did confide in me about what was going on, that she trusted me enough to share. Though I feel disloyal writing it here, I know she would have hated me doing it.

That Christmas she rang me and asked me what floor I was working on, when I aksed why she said she wanted to send me something over on the conveyor, my christmas card, and apologised for it being late and her not being very festive .So I told her where I was and 20 minutes later I opened a conveyor box to find a card written in her very distinctive hand and a little package.
It was my cross.
I rang her straight away and she joked I had FINALLY worn her down, she was giving in, I could have it! She then said she wanted to say thank you for my support of her. I felt a bit guilty really as I didn't, and still don't think I did that much.
We then had an undignified wrangle over whether she was going to let me pay for it or not, she most certainly was not! 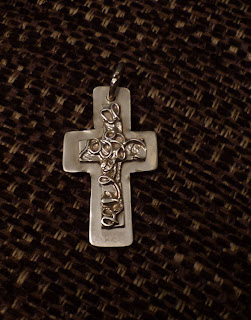 This year Vear was diagnosed with cancer. I heard on the very same day I was made redundant and it certainly put the whole job loss bit in perspective.

There are those who would say it is a dreadful thing that someone so young and full of life should have to deal with so much and then get sick and die. It is hideously unfair and unjust and they would be right. It is all of those things and more.

I would like to add to that. Vera just gave and gave, she enriched the lives of so many people and made life a better place for having had her in it.
Yes she could be difficult and a bit bitchy at times, but then so can we all.
Above that she had warm and generous heart, which means she will never be forgotten, and I for one feel honoured to have known her.
Posted by Miss Magpie at 15:02