Today I am feeling much better AT LAST! Still coughing fit to burst but the voice is back and I have some energy = huzzah.

I had to go into town to pay my credit card bill (gulp) and mail two birthday presents so I wrapped up warm and headed out with a bag of bits I had sorted out for charity too. Well by the time I got to the high street I was melting, it's nowhere near as cold out there as I thought it was going to be! I spent the rest of the trip 'glowing' and wishing I could have lost a layer or two.

Once the bank had been done I came back via the many charity shops in my town. I *know* I have sworn off shopping but you have to have a few cheats here and there don't you? and do charity shops really count as shopping? really? 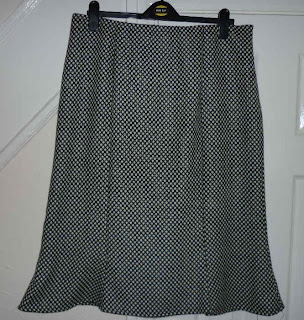 So I found this lovely skirt. It's wool but black and white dots rather than a tweed pattern. I love the kind of mini fishtail effect at the hemline. It's a little big but if a belt won't sort that I can take it in. 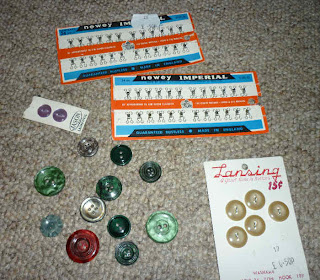 Next are a few sewing box goodies. I love rumaging for this kind of stuff. It's like being little and playing with my mum's button tin. 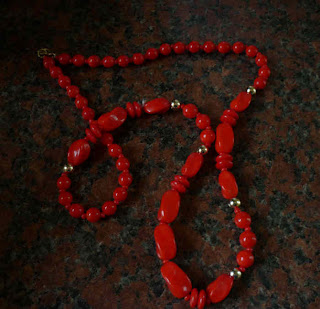 I also found this red glass bead necklace which needs to be restrung, it's hanging together by a thread literally!
I also found the 'something red' for my bloggy swap which I won't show a picture of in case she is reading this ;-)

So to projects.... I had a good sort through all my fabric and bits last weekend and found I had quite a few pieces of fabric with snowmen on, not exactly a surprise I know, but I have pondered for a while what to do with them as they have accumulated. None of them is really big enough to make anything with as such. Inspiration came from some old mags I was reading whilst I was feeling ill. One was a christmas edition and I spotted some lovely homemade bunting in one of the pictures and had the lightbulb moment. I don't have my sewing machine at the moment so it will have to be sewn by hand which could well take forever and drive me demented but I have another project to add to the pile! 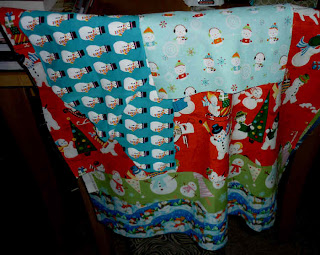 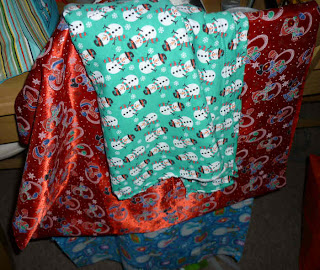 Here it is all ironed and ready to be cut out....
If I had enough fabric I would make myself a dress out of the red satin and Himself said he wanted a Hawaiian shirt out of the green you can just see in the first picture. 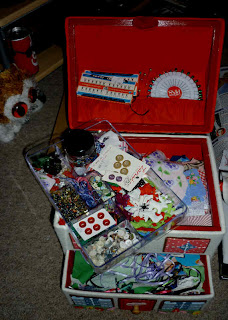 Oh and here is the Cath Kidston workbox in what can only be described as a very filled condition oopps.
Posted by Miss Magpie at 05:11