Dress Crazy and the Quest for a Ring.

Three posts in as many days? there must be something wrong, and indeed I am at home today nursing a decidedly unhappy tummy. Not sure if it is something I have eaten or a bug, but whichever, my poor tum and therefore myself is suffering and I'm sure you don't need to know any more details than that!

Thank you for the lovely comments on my holiday purchases. For those who wanted to know the Bird Print Top came from Dorothy Perkins and yes I was surprised by that too!

Anyway I thought I woud share a few more new purchases. The other week I had a bit of a clearout of one of my wardrobes and sold quite a few dresses on Ebay.Since then in true Miss Magpie fashion instead of letting the wardrobe sigh with relief at having a tiny bit of room on it's rail, I have set to with a will and bought almost as many new dresses as to make fitting them on said rail a serious issue. Bad very bad *sigh*
The first two were from ebay, you know how I said I end up browsing and buying when I sell? 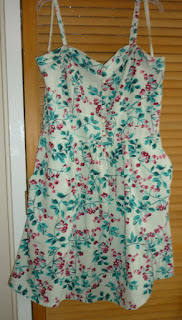 sorry crap picture! Summer dress which appealed to me because I thought it was holly print on the fabric which I thought would be weird in a cool way on a summer dress. As it turns out I think it is meant to be cherries? Anyway it has front pockets which is always a bonus. 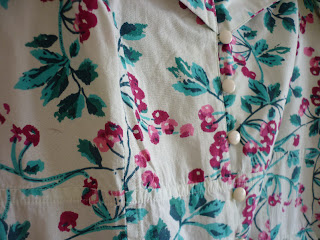 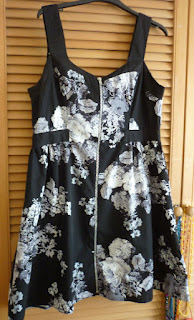 Another summer dress. I liked the front zip feature. 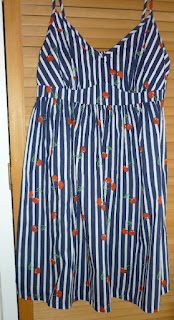 Would you believe this is from M&S??? Cherries and nautical stripes is a win in my book, (not sure if thi is in store or online only.) 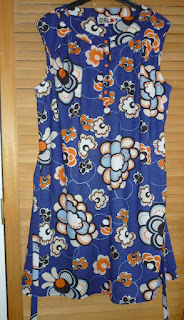 1960's replica dress from Chelsea Girl at River Island. I saw a blog from Vix a little while ago about the revival Chelsea Girl range that River Island had reproduced using some of their original outfits/patterns for inspiration. Also how she had picked up a couple of pieces in the sale for a song. I was walking past yesterday and there was a sale on so I stepped in and found this little gem.They had some other fab things but none in my size which was probably all for the good!

Today however instead of the lovely grey lace dress I was going to wear to work I am currently in sweat pants and this huge baggy top. I share with you it's cheery bunny face instead of my whitish green one. 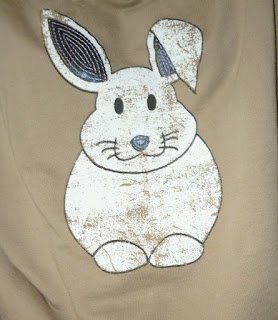 A few weeks ago the stone in my engagement ring fell out for the 3rd time!??! Thankfully on all 3 occasions I have managed to find it, I live in fear of not being so lucky next time. I took it back to the shop who had refitted it only 18 months before, (with only a years guarenttee on the work of course!) and asked if there was anyway they could make it more secure. The girl thought they might be able to put a claw on each end so it was duly sent off. I heard nothing for nearly 3 weeks so I went in, they had no news but rang the workshop whilst I was there. The only way to secure it was to completely change the setting and put 2 sets of 3 claws on each side apparently, oh and it would cost me £285. I made a loud, rude involuntary exclaimation to this price, it was instantly dropped to a 'good will gesture' price of  £170. Clearly there is something to be said for letting out involuntary outbursts of language in such hushed establishments!
I said I hadn't intended to spend that much and needed to talk to Himself and that I would return the next day. I was not happy, I thought about it all afternoon and discused it with Himself and decided against the work.
The first reason being I am not a fan of claw settings, I also think they need a faceted stone to look good and my stone is smooth. Also I could not see how they could change the whole setting without wrecking the ring. We decided on having the stone reset in the original setting and for me to stop wearing it everyday, this makes my heart heavy because it means a lot to me and I don't really want to 'keep it for best' but neither do I want to lose the stone.
So I am on the hunt for a replacement around the £50 mark to wear everyday. I found a couple of nice examples, I showed them to Himself who frowned and dismissed them all because 'he doesn't like rings with stones' To which I frustratedly waved my hands, currently covered in 8 rings all with stone settings, infront of his face and said 'but I DO!'
I know he's never been a fan of me wearing so many rings but I have always hated my fingers and since about the age of 14 have never worn less than this many at any one time. 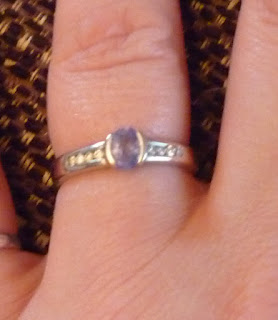 Anyway my ring is finally back and currently on my finger where it belongs whilst the hunt for it's everyday replacement goes on........
Posted by Miss Magpie at 08:19