What a freaking mental week it has been weatherwise! Sunday being the casing point in the space of 15 minutes we had sun, thunder, lightning, torrential rain, more thunder, hail, more hail and then sun again all with the back note of a gale force wind. Biblical is the word, I was fully expecting it to either start raining frogs or for the 4 horsemen of the apocalypse to canter down the street. Think I'm exagerating a little? let me share the three pictures I took on Sunday. 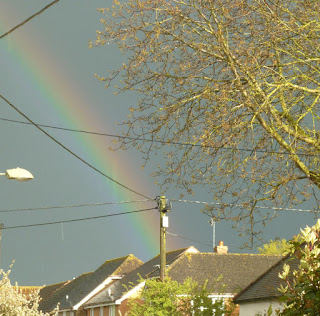 I grabbed the camera and stuck my head out of the front door, this was my view. I then scooted through the house and took this picture out of the back door.... Hail stones the size of marbles came down at one point.

I then took this picture of the sky at the back. 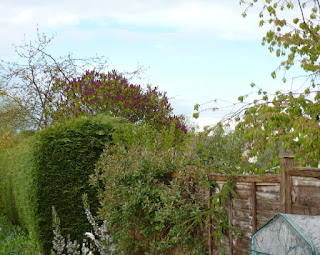 Blue sky no less, it was just plain weird. The weather has been the pits and it has made me very grouchy. I have serious garden withdrawl symptoms. I haven't been able to get out there for a few weeks now, mostly because of the weather. The weeds are taking over and my peas are about 10 foot tall under the cold frame, and positively desperate to get planted out. I am determined to try and get them in this Sunday. I can't get out there tomorrow for it is the day of the Hampstead Heath Mushroom Forage!

I shall finish by saying Himself and I went to see 'The Avengers Assemble' last night, I was VERY excited about seeing it it has to be said. Thankfully the film lived up to expectations. I didn't love it as much as I loved 'Captain America' or 'Thor' as stand alone films but it was great fun, especially when the fighting started and The Hulk had one scene that had us roaring with laughter. In terms of the eye candy I thought in passing (as you do) 'oh Robert Downey Jr has clearly been working out, and Chris Evans (Captain America) wow now he's bulked up a bit' then Chris Hemsworth (Thor) comes on and you think 'actually stcratch that, next to him they both look a bit puny!' lol.

Saw the trailer for 'Prometheus', not my cup of tea, even if does have my swoony Michael Fassbender in it. He's doing his 'voice' again by the way. My first thought was 'Hmm I wonder how long he will keep it up in this film'. He does this clipped English accent (his real accent is Irish) and when he does a dramatic scene he clearly gets so involved in the emotion of the scene the voice just goes and his natural accent breaks through in a most bizarre fashion . The final scene on the beach in 'X-Men Origins' is a prime example, you just think 'What in the name of god was that he just said?' The Yorkshire accent in Jane Eyre was a bit mental too bless him.